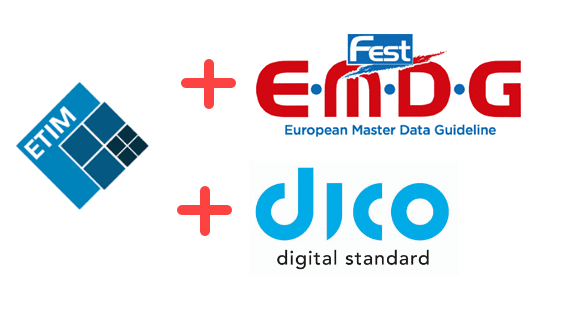 More efficient Master Data exchange and better data quality? We are working on it!

More efficient Master Data exchange and better data quality? We are working on it!

Sometimes, developments seem to coincide so beautifully, one can’t help but act and create momentum. The upcoming release of the first version of the European Master Data Guideline (EMDG) by FEST has triggered us to start the development of a new international ETIM data exchange format to replace the current ETIM BMEcat format.

The European Master Data Guideline – or EMDG – aims to uniformly identify and define common master data attributes (basic item data). Its use in combination with the ETIM classification (technical product data) results in a complete set of product data. The guideline is developed by FEST, the European Federation of the Sanitary and Heating Wholesale Trade, with the support of ETIM International as standardisation expert. Whilst initially developed for the HVAC and plumbing industry, the guideline is intended to serve other industries in the future, too.

It should be noted, that the EMDG is only the guideline that uniquely identifies and defines the master data attributes but doesn’t describe any particular exchange format between software systems. However, the EMDG constitutes the common basis for the product data contents for all different exchange formats, so the guideline is applicable for any type of transfer method from Excel or XML to API etc.

Harmonizing the ETIM BMEcat format with EMDG may seem the obvious next step. Instead, however, we decided to expedite the planned development of a new international ETIM exchange format. The future of ETIM BMEcat was already up for discussion: the basic BMEcat format was frozen many years ago with no possibility to apply for changes. The fact, that every single extension needs to be developed as a user defined extension in order to still validate as BMEcat file, makes the format confusing and far from ideal (especially in XML). With our plans for a renewed format on the table anyway, imposing this many changes on current BMEcat users now only to confront them with switching to a completely new format in the near future wouldn’t make sense.

In the meantime, ETIM BMEcat is still widely used and probably will be for some time. Therefore, we decided to update the format one last time with only the most needed changes to keep it workable. This final ETIM BMEcat version 5.0 is in final draft status and will be released by the end of June.  The fact that only the new format will be harmonized with EMDG might give an extra push to change to the new format.

From the moment we decided it was time for a new and improved international ETIM exchange format, we started to explore what was already available ‘within our own ranks’. We soon came to the conclusion that we needn’t start from scratch: the existing Dutch DICO (DIgital COmmunication) standard could provide an excellent starting point.

The DICO standard, managed by our Dutch ETIM representative Ketenstandaard, is a set of digital communication standards for electronic communication between supply chain partners in the Dutch construction and technical industry. Although it contains many more transactional and other formats, only two standards are relevant to our current scope: Price Catalogue (for basic item data) and Product Data. These two DICO standards basically cover the same as the current ETIM BMEcat and are already highly compatible with the latter, even including ETIM MC. In addition, with many supply chain partners in the Dutch market working with ETIM BMEcat as well, Ketenstandaard wholeheartedly favoured merging both in a futureproof integrated international format over separately maintaining two different formats to offer the same information.

DICO is based on the international GS1 XML (eCOM) format, which also means that the schema as well as the full documentation is already available in English. Moreover, it is better structured compared to BMEcat and a lot more consistent. In other words, with ‘ETIM DICO’ (the name is still provisional) we are confident to develop a new and versatile standard ETIM exchange format. The new format will be designed in JSON, which is well suited for both web exchange as for exchange as complete file. And of course, the next step is to fully harmonise the new ETIM exchange format with EMDG. Clearly also all fields in ETIM BMEcat 5.0 will be considered as well, as far as not already included.

As you can imagine, we are excited to start its development together with all ETIM countries joined in the Standardisation Committee (ETIM SC) soon after the release of EMDG and ETIM BMEcat. Our aim is to have it finalised by the beginning of 2022. So, let’s get to work!