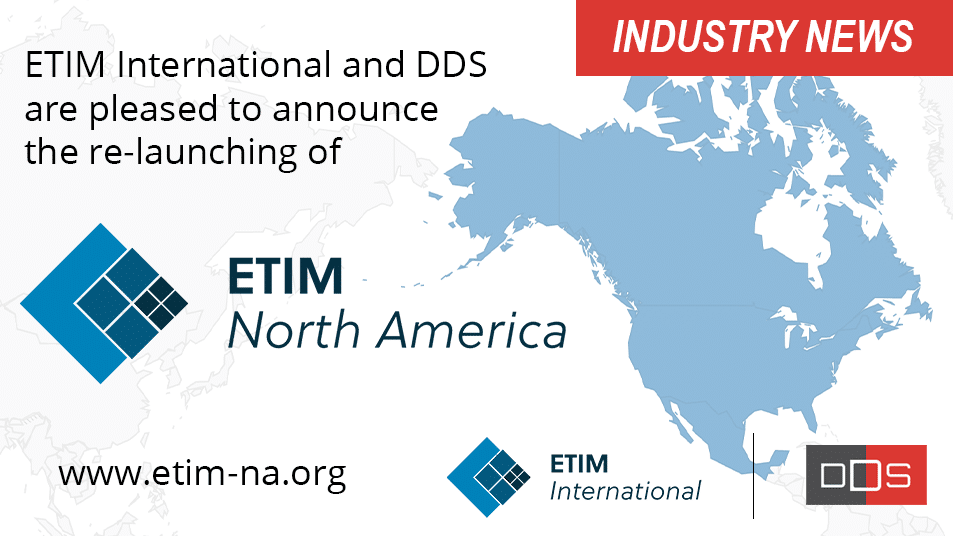 Today, the re-launch of ETIM North America was announced. ETIM International warmly welcomes this initiative to revitalise the ETIM organisation responsible for maintaining and promoting the adoption of ETIM standards in the U.S., Canada and Mexico.

“We will pursue more aggressive promotion of and adherence to the ETIM model and standards at a time when they are becoming essential in the global market,” says Matt Christensen, the new president of ETIM North America. “We have some catching up to do, but this initiative is absolutely relevant and beneficial to the U.S., Canada and Mexico. Within North America, the initial focus has been the electrical industry and we’re working to finalize those standards and then moving into complementary industries.”

Matt Christensen is president of Distributor Data Solutions (DDS), a technology and product content solution provider to the wholesale industry and founding member of ETIM NA. “Our relationships and our role in the industry, along with our focus on technology-driven solutions, give us a solid strategy for pushing adoption and demonstrating value to both suppliers and wholesalers” says Matt. When asked why companies should join ETIM North America, he says the “short answer” is that this collaboration “can reduce costs in the supply chain and bring more value and functionality to users of this information—which includes all of us. The ETIM model is already proving a stable, yet flexible standard that is future-oriented.”

As global business dynamics and e-commerce initiatives have accelerated, with ETIM becoming the global standard, the current re-launch is received with great enthusiasm: “We are very pleased to see the new ETIM North America association in position to steer the further development and implementation of our worldwide product classification standard with new energy and dedication,” says Jan Janse, president of ETIM International, head of the ETIM community. “We value and support the DDS initiative and commitment, especially considering how important the North American market is for ETIM.”

To learn more about the renewed ETIM North America, visit www.etim-na.org, or contact Mary Shaw, Executive Director at +1 (385) 240-0444 or mary@etim-na.org.